The Fit Club on Maori TV

As part of our central region training we had the crew from Maori TV's "Fit Club" will be screening later this year around OCT/NOV, will post when we have the exact date.

It was an awesome day with Wairangi Koopu, Peter and Dave joining us for a day packed full of Ki o Rahi and many more games. Here's a panui on the "Fit Club" keen an eye out, should be an informative, fun and motivational show, esp. the episode with our training.

"The FIT Club is a 13 part series on health and fitness presented by 3 of Aotearoa's fittest people. Lisa Tamati broke her back in her early 20's and was told to forget about being too active.  Since then she has gone on to run the equivalent of 2 and a 1/2 times around the earth...oh did I mention she's asthmatic and carries an inhaler.  Lisa has finished some of the toughest endurance races in the world and she'll tick off a couple more extreme challenges by the end of the year.  Watch this space.    Wairangi Koopu played 159 times for the Warriors including over 50 consecutive games, earning him the nickname "Mr Consistency".  He's the guy could could clock the beep test.  One of the fittest players to have played NRL footy.  Darren Ellis has a Masters Degree in exercise physiology and nutrition, a personal trainer for over a decade and is co-owner of his very own gym...Crossfit New Zealand, the first crossfit gym in Aotearoa.  When Darren's not helping people achieve their health and fitness goals he's probably hard at work himself training to compete in the Crossfit games, the testing ground for the World's fittest all-round athletes.
The Fit Club will motivate, educate and inspire you to take care of the most important person on this earth...YOU!
Join The Fit Club. 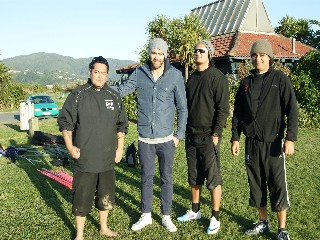 R2R is Part of Kokiri Marae