Check out the video on how to play Kōruru

A game traditionally used as a training method for Toa (warriors). Helped to read the opponents movements and learn to evade attacks and disguise your attacking movements. This game is called Matimati down in the south Island.

Is a 1 on 1 activity that can be used as an ice breaking activity by rotating players, or as a warm up for more strenuous games.

Players stand opposite each other at arms length. Both players feet must remain planted at all times and point towards your opponent

The idea is to strike your opponent with an open hand, palms facing upwards, while the opposition tries to evade the attacker.

Like most games there are lots of ways to play mitimiti, the following are some basic versions.

Small area needed where you and your partner can face each other. If bigger group then bigger space.

Level 1 is hit the shoulder, level 2 shoulder and the waist, level 3 shoulder, waist and the knees.

Remember it's more of a tag than a smash! If you hit your opponent hard, then they can get you back!

Each player has 10 attempts to strike the opposing player, if they hit the target they score a point, if they miss, the opponent gets a point.

Another option is to play 30-60 seconds for each person to attack, add up the points from hits and misses to determine the winner.

Depending on the flexibility and fitness of the group most games only progress to level 1, if you get past level 3 you can add blocking and any one can strike at any time.

Traditionally Poi Rākau was a training game for warriors. One person stood in the middle (pūtahi), surrounded by the throwers (tukunga) standing in a circle (wī). The rākau were made from Mako wood and sharpened. They were thrown to the person in the pūtahi. On catching a rākau the warrior threw it at a person in the circle who didn't have a a stick, who then had to catch and throw it on.

Pass the rākau with out dropping it or hitting other players.

Small area can be played indoors as well as outdoors

Traditionally this game helped developed skills when using a rākau or Taiaha.

1 person in the middle (putahi) of the group passes out to the circle.

Other actions can be added, such as leg lifts or head tilts and the catcher must copy Noises can also be added Jumping actions or clapping before the catch.

Maui/Matou; rākau placed standing up on the ground. The players leave their rākau and move quickly to the left or right trying to catch the rākau before it touches the ground.

A player can be eliminated if they don't catch the next rākau or make a bad pass (where the other player has NO chance of getting to the rākau befor it hits the ground).

Can also be used as a team building activity where you try to get all people catching or a certain amount of catches.

Traditionally used for Toa (warrior) training. Leg speed and explosive power were essential for dodging strikes from attackers or moving into position to attack an opponent.

Can be used as an ice breaker or as a warm up to more strenuous games.

The object of the game is to jump as high as you can and catch your opponent landing in the same position as you.

Small area needed where you and your partner can face each other. If bigger group then bigger space.

If you are still in the air when your opponent has landed you can land in that position, on the flip side, your opponent may be waiting for you to land in the same position and will be ready to snap you out.

There are 4 basic moves to the activity, all of which are started with the call "whano" and both players jump as high as they can and land in 1 of 4 positions. 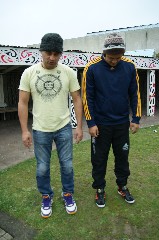 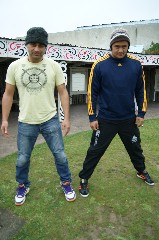 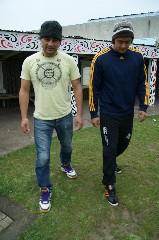 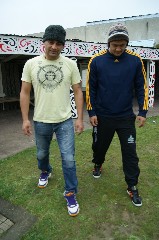 Game 1: Both players call of whano and jump as high as they can and land in 1 of the positions above. If there is a mirror image, the 1st player to call "HI", gets the point. If both players call HI, then the player who calls loudest is wins the point!Play is restarted after each point, the game can be played for a set amount of points or time. 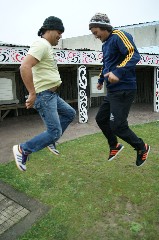 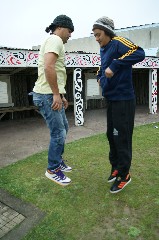 Game 2: each player has turns calling "whano" if the pair land in mirror image the caller gets the point and you play on.

Pics below are examples of points scored,we use mirror image as it's easier to decide, can can also play left and right foot snaps. 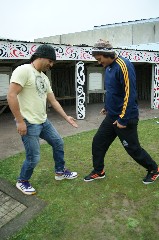 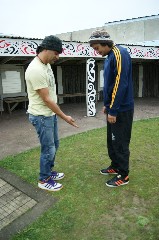 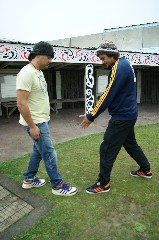 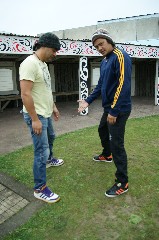 Poi Toa - How to make a Poi Toa

Learn how to make a Poi Toa by watching the tutorial video above.

Please remember that Poi Toa are different from performance Poi used during Kapa Haka. Do not use your "performance" Poi as a Poi Toa as that is not what they are for!

Resources need to make a modern version of the Poi Toa:

R2R is Part of Kokiri Marae